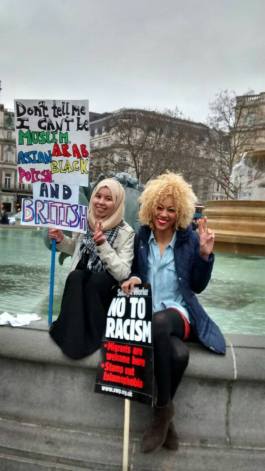 By Sarah Lamptey
I’m mixed-raced; my father was brought up in England to Ghanaian parents and my mother is English. I’ve always lived in either Surrey or London and I’ve used the word “lucky” in the past, to describe getting so far into my twenties with only one direct experience of racism (aside from an overwhelmingly hostile reception in Budapest a few years back). The word never sat right though – in the world the decent and common-sensical are striving for, this kind of luck would be unnecessary. We’d save all of our good fortune for acts of God rather than human ill intent. Also, whether experienced late or not, the brutal truth remains the same. Humanity still has a distance to travel and no progress ever came from a rose-tinted perception.
My one direct, racist confrontation was brief and relatively mild, although it shocked me at the time. Late last year, in Kingston, I crossed paths with a man who called me a “f*cking black…” I didn’t hear exactly what I was because I’d sped up, my legs seemingly taking their own initiative. My brain was busy regressing to that of a confused child, “But I didn’t do anything”, it repeated, whilst pushing out shocked, angry tears. Social media came into its own. I felt alone and in pain and was compelled share it the 21st century way: in the form of a Facebook status. The words of support and condemnation went on and on over the next few days, often in lengthy, considered and moving replies. In the face of the animosity people had come to show their beautiful – often hidden – colours and I came to feel more positive about humanity than I had before it had happened. Though less rosy, more real.
On Saturday 21st March, UN Anti-Racism Day, I saw journalist Owen Jones tweet that there’d be a march “against racism, anti-Semitism and Islamophobia” that afternoon in London, organised by Stand Up To Racism. The date signifies the anniversary of the 1960 Sharpeville Massacre in South Africa. It was to be my first march – not my proudest admission. I’d never gotten myself organised and I barely made this one, only spotting the tweet an hour before it started. On the train I felt energised; I had a purpose. I was to be involved in what I completely believed in. A bizarre shyness and uncertainty flooded in though, the moment I emerged from Oxford Circus tube station into the masses of people. I doubted I was up to the task, whether I was loud and strong enough. I accepted a Socialist Worker placard that read ‘NO TO RACISM’, with ‘Migrants are welcome’ and ’No to Islamophobia’ underneath as bullet points. Holding it, I was verified as a protester, associated with resilience and resolutions yet I felt the opposite, perhaps remembering that reduction of myself as an “f*cking black” something. I walked up Regent Street to the assembly point at Portland Place and in record time made a new friend, Meriel. We stood waiting for the march to begin, making our observations to one another. The atmosphere was infectiously jolly, raucous even. There was a shifty moment when the megaphone leaders started chants that everyone else seemed to know, but the lyrics weren’t tricky. “We are Black, White, Asian and we’re Jews (and we’re gay!)”, to the tune of “She’ll Be Comin’ Round The Mountain”, quickly became my favourite. It really sticks in your head.
The route took us down Regent Street, through Piccadilly Circus, down Haymarket and into Trafalgar Square. With speakers blasting dub in front, weed wafting to my right and noise all around, the protester in me took its first breaths, warmed up and burst into song. It occurred that I should believe in what I was chanting. In extreme cases it was a bit like my childhood, growing up going to church and missing out the parts of the hymns I didn’t absolutely subscribe to. Variations on political beliefs aside, it was an entirely pro-equality and pro-peace parade. I hoped that word and images of marching crowds across the world would get to victims of prejudice and lift them, even a little. As we came up to the Eros statue in Piccadilly Circus, the air changed. The crowd ahead started to sing with less bounce, more power, “There are many, many, more of us than you…”, pointing to where a group of men stood behind policemen. This was the Anti-Anti-Racism Day protest. Ironic that a statue of the God of Love was chosen as their meeting point. It was a feeble assembly, a few rows on the steps, standing and staring. Heart pounding, face hot, ground suddenly less of a support, I began to rewind. But stopped. I was struck, like a good hug that takes you by surprise and knocks you unsteady, that I was surrounded by the intense positivity of many, many strangers. More bright, true colours out of darkness.
15,000 people marched in London, Glasgow and Cardiff on Saturday. We know that world unity won’t be brought about any time soon. But to get involved, to join voices and make connections even on the smallest level is progress that all of us can manage. As I left, a woman pointed to my sign and spat,  “No, [migrants are] not welcome here”. Only she said it very, very quietly.
http://www.standuptoracism.org.uk
@sarahlamptey

There was an error retrieving images from Instagram. An attempt will be remade in a few minutes.